Carrier injection, transport and extraction are crucial physical properties for optoelectronic applications such as solar cells and light-emitting diodes (LEDs). Depending on the magnitude of the exciton binding energy in a material, electron-hole pairs can exist as free carriers or can form a bound state, so-called excitons. Large binding energies appear especially for systems where at least one spatial dimension is confined, e.g. in nanocubes, 2D nanoplatelets 1D nanowires or 0D quantum dots. Consequently, carrier transport will be very different depending on the nature of the material.

Our goal is to investigate and understand carrier diffusion in large perovskite crystals and assemblies of nanocrystals. For this we have realized a contactless photoluminescence (PL) and confocal time-correlated single photon counting (TCSPC) setup. We use this to measure the diffusion length of charge carriers in bulk perovskite films, and of excitons in thin films of nanocrystals. We modify the perovskite compositions, geometries and passivating ligands to investigate the nature of the transport processes and determine critical parameters such as diffusion lengths and diffusion coefficients. 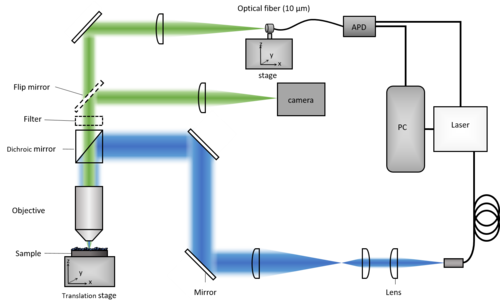 If you want to know more about diffusion microscopy, feel free to contact Michael Lichtenegger.